More than 2000 cryptocurrencies rely on blockchains to transfer digital assets from one point to another. However, not all blockchains are built the same. Some are more scalable than others. Some, like Ethereum, offer more than one service.

Each upcoming cryptocurrency strives to solve a common problem using the blockchain. Some coins have been around for years, solving all the problems new coins want to solve efficiently.

Think of Blackcoin. Developed more than four years ago, it has a blockchain and capabilities few of the new coins have. The coin utilizes proof of stake algorithm to overcome the challenges experienced by Proof of Work coins like Bitcoin and Ethereum.

It may not always be hyped, but read on to learn what Blackcoin is and why it needs more attention.

Blackcoin is a peer to peer decentralized network launched in 2014. In contrast to Bitcoin, Blackcoin utilizes a complete Proof of Stake system to verify transactions passing through its payment protocol.

Blackcoin is one of the first decentralized networks to utilize a Proof of Stake algorithm. Its coin, BLK, is used as a currency of settlement on its network. Blackcoin was developed to offer an alternative to the energy consuming Proof of Work system utilized by Bitcoin. It also aimed to eliminate the middlemen in cryptocurrency networks: miners.

Bitcoin miners receive a fee for every transaction they verify. The fee ranges from $1 to $50 when there is high demand for Bitcoin transactions. For many traders, the fees paid for Bitcoins transactions are prohibitively high.

Since competition to mine Bitcoin increases the coin’s mining difficulty, Bitcoin miners unite to verify transactions in pools. In the process, they also centralize Bitcoin. Any changes that should be done on the Bitcoin protocol have to be voted for by mining pools, in a way defeating the sense of decentralization.

The Proof of Stake mining algorithm gives the power to mine coins to any coin holder. Instead of individuals buying expensive miners, Blackcoin miners are the coin’s investors. They get involved in the mining process by staking their coins. Staking coins means securing the coins in a wallet for a specific period of time.

Staking is beneficial to a coin as it eliminates inflation by keeping the coin in demand. Miners chosen to verify transactions in a PoS system can be chosen randomly or based on the number of coins they own.

With Blackcoin, staking your coins attracts an annual return of 1%. If you buy $10,000 worth of blackcoins and hold them for a year, you will have a guaranteed $100 after 12 months. You can earn more when there is a low demand to stake and mine BLK coins, sometimes as much as 8%.

Compared to Bitcoin, Blackcoin offers investors more control over their money. Not only do they earn by holding coins, but they also avoid paying the expensive miners’ fee incurred by PoW systems like Bitcoin’s. 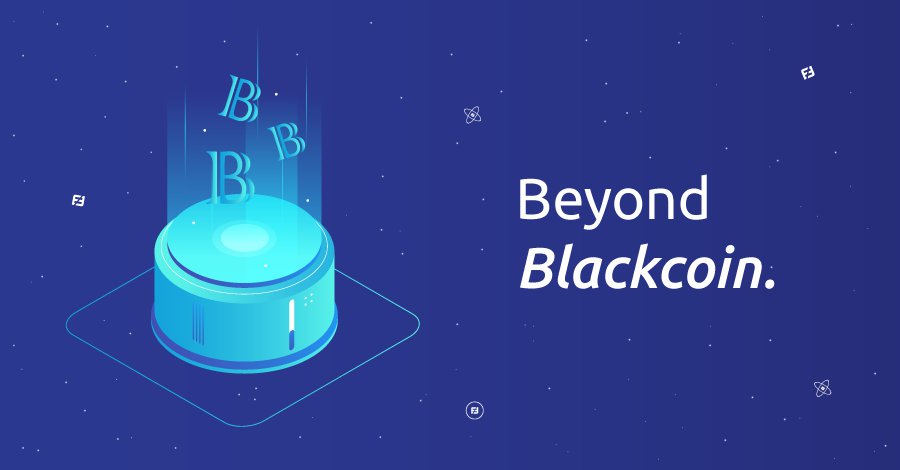 Blackcoin is built on the same foundation as most cryptocurrencies. At its core is a distributed digital ledger that records any transactions made using Blackcoin cryptos. BLK coins are represented by addresses encrypted using cryptography.

Each BLK crypto has two addresses, a public, and a private address. The private address/key proves you own the coins and helps you withdraw the coins through a cryptocurrency exchange. If you want to use Blackcoin to make a payment, you must first purchase BLK coins on an exchange that supports them. Bittrex and Poloniex are two of the well-known exchanges.

Staking blackcoins and all coins that use the PoS system is done on personal wallets. Blackcoin provides a desktop wallet for BLK coins only, but there are lots of other wallets that support the cryptocurrency. You have to unlock the Staking option under the settings of your wallet though.

Once unlocked, you can stake as many blackcoins as you want. Staking the coins prevent you from using them for a specific amount of time. However, it also helps you verify other traders’ transactions. The verification is done automatically, and usually, a Blackcoin transaction takes a few seconds to complete.

Blackcoin traders pay a small fee to have their transaction verified. These fees are later paid to people who stake their coins. All records about transactions are kept public on the Blackcoin payment protocol.

It’s worth noting that you don’t pay to stake your BLK coins. You also don’t pay to the Blackcoin desktop wallet. However, you may have to pay if you choose to buy hard wallets.

Minting is used synonymously with staking. It’s the term used to mean mining a Proof of Stake based cryptocurrency. Staking coins on a PoS cryptocurrency network boosts its ability to verify transactions fast. Usually, the higher the number of coins you stake, the faster a network is able to confirm payments.

On February 22nd, 2014, Blackcoin got listed on exchanges. It opened trading at a price of $0.012. Within two months, its price had doubled. The coin enjoyed a valuation of above $0.2 for one month before losing value steadily over the course of one year.
Blackcoin investors who purchased the BLK crypto between February and April 2014 had to hold their coins for at least 3 years to make profits. Blackcoins traded at a price of between $0.15 and $0.13 for three years.

On May 27th, 2017, Blackcoin suddenly moved up from a just $0.17 to $0.5 within a span of hours. If you had invested $1000 early that day, you could have made more than $4,500 within 10 hours. Blackcoin maintained a price of above $0.5 for almost one month before undergoing a correction that lasted for four months. The market correction left Blackcoin cryptocurrency trading at just $0.2

The cryptocurrency began to gain value in mid-November 2017 at a time when almost every other cryptocurrency was gaining value. Blackcoin’s market cap moved up from $28 million on November 11 to $87 million by December 23rd.

Blackcoin’s highest peak price ever was on 10th January 2018, when after opening trading at $0.8, the coin hit the $1 price and went up to $1.3. What followed was a market correction that affected nearly every cryptocurrency. Blackcoin’s correction, however, seems to have extended as it continued to lose value for the next three months.

For a brief period between March and April, the coin gained a 50% value. The coin then assumed its negative price movement up to the current price of just above $0.13.

In 2018, the opportunities to earn by investing in Blackcoin have been few, but they happened. For example, after the market correction in January 2018, the BLK coin was valued at $0.3. By the start of March, the Blackcoin price was $0.51, an upward growth of more than 50%.

Another market correction occurred in March, and the coin’s value went down to $0.19. By May, Blackcoin was trading at above $0.3 once again. In general, Blackcoin has favored swing traders and long-term investors more than day traders.

Blackcoin is one of the first cryptocurrency networks to adopt a Proof of Stake mining algorithm. Launched in 2014, the network has been around longer than Ethereum and several of the top cryptocurrencies.

With a hard cap of $75 million, the coin has always had a considerably large supply. Blackcoin is mined through staking, and everyone who holds the BLK coins annually earns a 1% profit. Staking regularly attracts a higher return.

Speed-wise, the cryptocurrency network has a block time of just 64 seconds. Transactions made through the Blackcoin blockchain are completed within a few seconds, making it faster than a lot of networks out there.

The BLK coin is listed on 17 crypto exchanges. The coins have had a roller coaster of price movements, but the long-term Blackcoin growth has been positive.

Thank you for reading our Blackcoin guide. Find more reviews and guides about cryptocurrencies on our website.