The cryptocurrency market, which didn’t exist prior to 2008, has really exploded in the last decade. With so many players, coins, and technologies in the marketplace, it can be hard to understand which coins to invest in or to adopt as a currency for use. There are a lot of seemingly complex terms and technologies being used behind-the-scenes, and the differences between one coin or currency and the next are not always easy to ascertain, especially for those without a strong technology background.

One of the more popular options, after Bitcoin and Ethereum, is Dash, which is a shortened form of the term “digital cash”. Dash has a stated goal of making cryptocurrency so easy to use that “even your Grandma could use it”. To that end, it builds on the basics of blockchain technology, adding new and exciting features that set it apart from the competition.

With a current market capitalization of over $2b USD in 2018, it’s one of the most capitalized currencies available today, a position it has achieved in less than 4 years of existence. It currently ranks 14th overall in terms of market capitalization according to most tracking sites, out of approximately 1600 crypto products tracked. While Bitcoin is over 100x more capitalized than Dash, sitting in 1st place, just another 14 slots down from Dash, the market capitalization rates are about 20-25% of Dash, meaning it’s definitely in the shortlist for widely adopted cryptocurrencies.

Dash cryptocurrency was developed and launched in 2014 by Evan Duffield. It went through several name changes and iterations in the early years, including initial launch as XCoin, and later Darkcoin, but had stabilized as “Dash” by March 2015. It is primarily focused on the merchant/seller payments industry, with many of its features being geared toward those objectives. Like many other cryptocurrencies, coins can be purchased outright on exchanges, or mined (where users use their computer processing power to verify transactions and provide network security and redundancy, in exchange for a cut of newly generated coins).

Dash is also unique in that it was one of the first successful adoptions of self-funding and self-governance, where the funds for development come from the actual proceeds from the blockchain, and the governance is controlled by users who run master nodes on the network (more on that in the next section). This makes it one of the first successful DAOs, or decentralized autonomous organizations.

A simple way to have Dash explained is that it builds on the features and technology of Bitcoin, adding in various budgeting and governance features, a master node network, and instant and private transactions.

Under the hood, Dash crypto works very similarly to Bitcoin on the most basic level – that is, there is no centralized authority or control that manages the transactions. Everything exists on a distributed ledger on the network, with new coins and transfers of value/coins from user A to user B, all taking place in a transparent way. The network itself is made up of master nodes, essentially autonomous virtual machines/servers that users have allocated to process and verify ledger transactions for the network, in exchange for a reward of coins and fees.

With the master nodes, Dash has significant processing power at its disposal. This has translated into additional features not present in Bitcoin, including InstantSend and PrivateSend.

Without getting too technical, InstantSend means transactions can be confirmed in as little as 4 seconds (as opposed to minutes or even hours in the case of many other currencies). The master nodes reach consensus on whether or not the transaction is valid, and lock the funds in place, essentially promising the network that the transaction will be fully validated in the next blocks that are processed.

PrivateSend helps to obscure the identity of users and the origin of funds on the network, while still maintaining the transparent ledger. It accomplishes this by “virtual mixing” of the inputs of your wallet, which holds your Dash coins, with the inputs of two other random users’ wallets, without any funds actually changing hands in the process, thus heavily obscuring the origins of each transaction.

The rest of the functions are largely comparable to other cryptocurrencies, with coins existing in user and merchant wallets, and payments in effect moving coins from one wallet to another, without going through a centralized authority or intermediary. 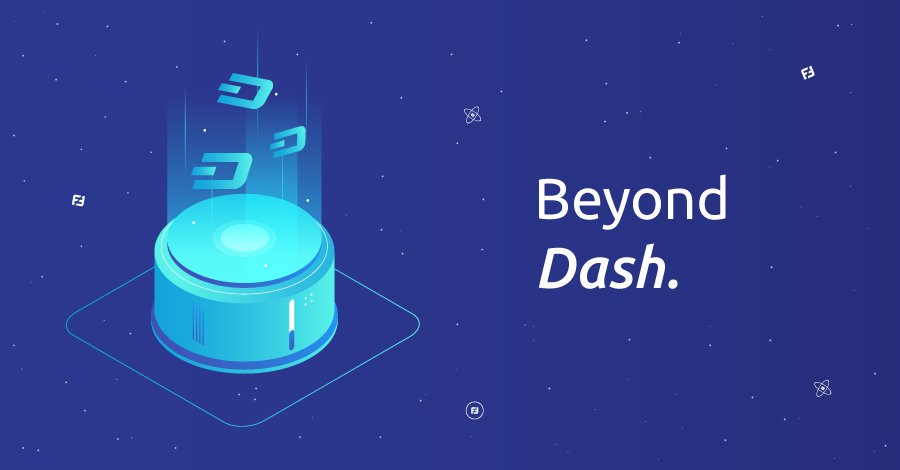 Dash crypto, like all cryptocurrencies, uses what is known as a hash algorithm to mine new coins/process and verify transactions on the blockchain. Bitcoin uses an algorithm known as SHA-256, as do many other cryptocurrencies. This is essentially a set of mathematical calculations and operations that run on a block of data, comparing the ultimate output to a list of known/expected outputs, to verify data’s integrity.

In the case of Dash cryptocurrency, the algorithm used is known as X11. Like SHA-256, it is a proof-of-work (PoW) algorithm, which basically means that processing power is required to “solve a puzzle” and prove work has been done, to prevent network abuses and nefarious uses, validating the transactions and data.

X11 was created by Dash’s developer, Evan Duffield. It uses 11 different cryptographic hashing processes, thus making it much harder to develop high-efficiency ASIC mining processors to mine, and helping to retain a fair and even distribution of coins in the network. Over time, ASICs have been developed for X11, but as with most cryptocurrencies, Dash changes the difficulty level and reduces the reward level over time, meaning that this plan has largely succeeded in maintaining a fair and equitable distribution of coins within the Dash system.

One of the reasons that Dash coin has become so popular is the increased anonymity of transactions from the aforementioned PrivateSend feature. While all transactions still exist on the ledger, it is not nearly as easy for people to dissect and try to trace back the origin of funds to specific users’ wallets. Functions still exist for the foundation behind Dash to comply with necessary law enforcement actions as to fund origins, but for the general user base, it makes transactions much more anonymous.

Another benefit of Dash is the decentralized nature, which goes well beyond that present in Bitcoin. Because of the master node system, the validation and processing of the network ledger are much more widely distributed, meaning there are more and more redundant points in the network, greater uptime, and greater security.

Further, Dash is focused on scalability in the digital cryptocurrency marketplace, something that is an inherent and known problem in earlier currencies, including Bitcoin. Bitcoin has a max block size of 1 MB, which limits the number of transactions that can reasonably be fit into each block. Dash, on the other hand, is built to scale up to 400 MB as needed, allowing up to 400x the number of transactions in a single block as compared to Bitcoin.

Dash does not just differ from Bitcoin in terms of the block size. One of the reasons Bitcoin is considered the original cryptocurrency is because of the timing of when it was released (6 years prior to Dash), and how, is one of the first true cryptocurrencies. It has gained the most widespread attention and appeal.

This has translated into a much larger market capitalization/market share today, with Dash running around $2B USD market capitalization, as compared to Bitcoin’s $106B. In many ways, this means, at least for the time being, Dash and other alternatives to Bitcoin remain firmly in the shadow of Bitcoin, even as they develop new and exciting features that are superior to the Bitcoin protocol.

The number of master nodes in use to allow for faster transactions, more verification, and other features on the Dash system is well another point of differentiation with the Bitcoin network. Bitcoin uses “full nodes”, meaning users that are connected and allowing their computer power to be used make up the nodes of the system. Dash augments this with master nodes, of which there are currently over 4,000. They sit as separate elements of the network and allow the special features like PrivateSend, InstantSend, governance, budgeting, and other activities that are simply not possible without the added layer.

One of the most important, though often overlooked, ways in which Dash and Bitcoin differ is in governance. Bitcoin has shown through its tumultuous history that lack of governance by stakeholders can be a major pitfall. Dash, on the other hand, allows for voting on proposals and budgeting by master node owners, who must put up a certain amount of Dash coins as collateral to run a master node, and therefore make up an integral part of the coin ownership and network function. Consequently, there are over 4,000 decision-makers to vote on Dash development and protocol proposals, as opposed to only a small cabal of insiders with Bitcoin.

Dash’s price and value have grown fairly consistent with most of the other major cryptocurrencies on the market. The coin started very slow and level from the time it was implemented until around 2017. In 2017 cryptocurrencies, in general, started to pick up major steam, as they became more widely used, accepted, and understood. The peak for all cryptocurrency values, including Dash, was in late 2017/early 2018, and since that time most currencies have corrected downward. However, they still stand well above their initial values from launch and are expected to once again climb in the future.

Most cryptocurrencies, including Dash, have a finite supply of coins in the system. This means the more coins that are mined, the more rewards are reduced for mining, and, over time, the circulating coin supply approaches the cap of the system. Therefore, the more people who use, accept and pay with the Dash coins, the more their value increase over time. Dash currently has a little over 8m circulating coins, with a system cap of 18.9m that will ever exist. So the value has nowhere to go but up!

Accordingly, this means that anyone who has invested in Dash or similar cryptocurrencies at any point in time other than during the massive run-up to peak in late 2017/early 2018, generally have made money on their investment. Put another way, in March 2015, when Dash was formally named Dash, $1,000 would buy an investor approximately 300 Dash coins. Dash growth since that time has been tremendous. At the cryptocurrency peak, those same shares would have been worth $469,200, and even in July 2018 are worth an impressive $72,000, a massive 7,100% return on investment!

Dash is poised to continue to grow in value and users, with the development team has grown significantly (over 30 employees) from the early days of a single guy working on the project. The stated goal remains to make Dash cryptocurrency as ubiquitous and easy to use as PayPal and other alternative payment systems that, when they first came on the market, were also seen as new, unique, and hard to understand, but are now a fact of life for millions around the globe.

Dash has many features that are superior to its forebears such as Bitcoin and is built on an extra layer of technology to solve the anonymity, governance/budget, and transaction speed issues inherent with Bitcoin and some other older, original cryptocurrencies.

Dash is available on most major exchanges, under the symbol DASH. For more information, whitepapers, and technical details, Dash’s parent organization, The Dash Network, can be found online.