Syscoin is one of the many crypto products developed in the last few years, following the explosion in the blockchain technology. Syscoin differentiates itself from other cryptocoins in that it has a network of its own nodes as a separate layer from the blockchain, designed to both handle and enable a lot of the heavy lifting that otherwise rests on the blockchain. This adds speed, resilience, and other features. It is designed to allow businesses and individuals to trade assets and funds, buy and sell goods, transfer digital certificates and data securely. They have also developed their own online marketplace where anyone can set up a store to sell goods or assets, comparable to an eBay or Amazon interface.

The typical decentralized benefits of blockchain-based technologies are all present here, in addition to many quality-of-life improvements that are possible because of Syscoin’s architecture. This includes wallet aliases, encrypted messaging, and no downtime due to the peer-to-peer distributed nature of the network, built-in arbitration/escrow services, and more. It bills itself as the “Swiss army knife” of cryptocurrency products, though remains fully compatible with Bitcoin, from which it was originally forked.

Simply put, what Syscoin is can be expressed as a global network, a decentralized database, a blockchain, a cryptocurrency, an altcoin, and a tradable token. That’s a bit of a mouthful, so we can break that down a bit further. It’s comparable to Bitcoin, but rather than having a value directly tied to supply and demand of coins or pegged to specific fiat currency, Syscoin’s value is derived from the utility of the coin, the services that Syscoin provides on the blockchain. One of these is the aforementioned marketplace, known as the Blackmarket.

One of the biggest goals of Syscoin is the use of the SYS coin, as its ticker symbol refers to it, to allow for near-zero fee transactions compared to major market players like eBay or Amazon. Whether attempting a transfer of funds, sale of goods or services in the Blockmarket, or other uses, the fees amount to so little by comparison, buyers and sellers both make out with more profit when the middleman is removed. Syscoin allows for this elimination while maintaining the kind of dispute resolution common to competitors via its escrow/arbitration element.

Syscoin was initially developed in 2014 as a Bitcoin fork, but following an ICO, there were internal conflicts with their chosen escrow provider who allegedly embezzled funds, an issue that remains in litigation in the UK. Nevertheless, the team behind Syscoin pressed on, including founder Sebastian Schepis, and the Syscoin crypto project has grown to version 3.0, deployed its marketplace, and integrated with Bitcoin for merge mining. 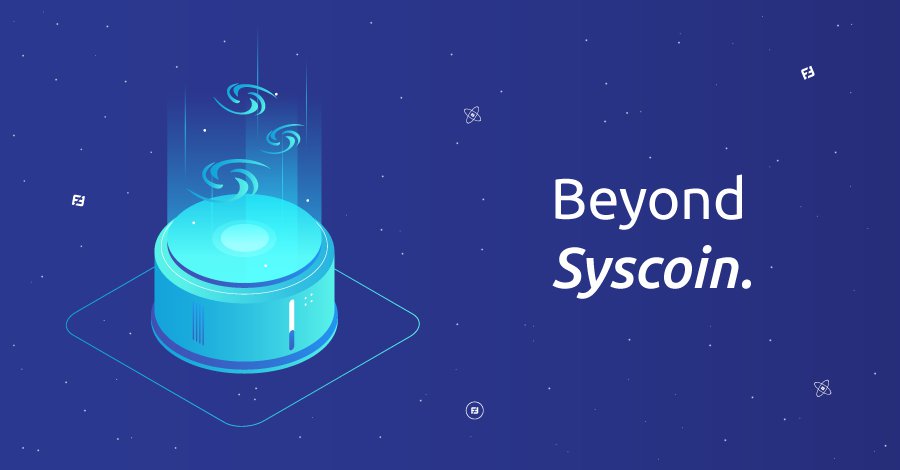 Syscoin works on some of the same principles as Bitcoin and other blockchain technologies. However, the system of nodes that are run makes up an independent, decentralized network to manage transactions, of whatever type may be desired. It only interfaces with the Bitcoin blockchain at various points and handles much of the rest of the work on its own network, including encrypted messaging, the Blockmarket marketplace, etc. Syscoin really is its own ecosystem and network of services, although many parts of the technology of the blockchain itself are similar to Bitcoin, such as the common SHA-256 hash.

The SYS coin itself can be used for these services, as can direct payment in Bitcoin and over 30 other cryptocurrencies that can be integrated into users’ wallets in the Syscoin system. It can be mined, though coin quantity is limited to 888M coins total in the system. The consensus is achieved in hybrid, parallel modes – both a proof of work model and a proof of stake model that work together to double-verify transactions while preventing double-payment. Without getting too technical, it allows for faster transactions, and a double layer of security against double-spends, as more transactions can be validated per block.

Syscoin has many features and benefits, not least of which is a partnership with Microsoft Azure and co-founding of the Digital Identity Foundation. Some unique points that set Syscoin apart from other cryptocurrencies include:

In a different mindset than other software middlemen-type organizations, the Blockchain Foundry directly works with companies or business sectors to integrate the Syscoin network into software solutions for business, with the added side effect of allowing for them to generate SYS coins by selling their products or services within the network.

Syscoin’s price and value have fluctuated quite a bit over time. However, as with the rise of other cryptocurrencies in recent years, SYS coin has had quite a value lift. At the debut in late 2014, the price per coin was $0.002. It remained relatively low (below $0.01) until early 2017, and since then, its trajectory has largely followed that of other cryptocurrencies, including benchmarks Bitcoin and Ethereum. At its peak in January 2018, it was worth $0.91 per coin and has since stabilized to the $0.20-$0.50 range.

Put another way, if you had invested $100 in SYS on January 1, 2017, you would have bought approximately 11,000 coins. As of May 31, 2018, those coins had a value of $3,850, an increase in the value of over 3,700%. The increase has been attributed to both the deployment of many features from Syscoin’s roadmap, integration with other currencies, and partnership with Microsoft Azure.

In summary, Syscoin has demonstrated remarkable growth in value over the last 2 years. The company has implemented many of the features promised in their original development roadmap, attempting to bring almost unlimited possibilities to blockchain technology. These features include the Blockmarket marketplace for goods and services, the Blockchain Foundry software group to bring blockchain solutions to business, merge-mining with Bitcoin and other standard coins in a crypto wallet, faster transactions than many other coins, and a fully distributed, 100% uptime network of nodes.

While it is impossible to predict exactly what the future holds for cryptocurrencies and blockchain technology, Syscoin is poised to grow and adapt with whatever changes may occur. Their vision is nothing less than a revolutionary deployment of blockchain technology into all sectors of commerce and business, providing the kind of security and redundancy companies’ need, along with the flexibility to develop innovative products and solutions for use cases that may not have even been thought of yet. They do bill themselves as the “Swiss army knife” of crypto products, after all, and the versatility and utility of the network and coin continue to validate that motto.