Most of the time people speak about crypto currency, the ordinary person not yet ingrained in the cryptocurrency world thinks about bitcoin. And to good measure, it is the most popular and most valuable coin in this market. In reality, there are more than 6000 coins in this industry, among them being Decred. In this article, we will endeavor to enlighten you on what decred is.

Decred is a coin that seeks to bring back the original idea bitcoin developers had of decentralization and equality. Decred was launched on the 8th of February 2016. Since its launch, the coin has risen tremendously both in value and popularity in the last one year. In 2016, the coin was worth approximately $1.20 at its launch. Less than a year later, this coin is worth $90.42. This value represents 7,435% change. Buying this coin at its launch would have been one of the best investment in 2016. If one invested $1000 then, their investment would be around $80,000 in the 2018.

Decred (DCR) is a self-funding progressive digital currency based on community governance. This coin uses different mining protocols to ensure that it retains the values of digital currency and at the same time ensure that the coin is decentralized. It is important to note that Decred is also limited like bitcoin to a maximum supply of 21 million coins.

Decred aims at becoming the most reliable digital currency for every day use. It aims to achieve this by ensuring users have easy access to the system using every day normal devices and ensuring that specialized miners don’t take over the system as in the case of bitcoin.

Decred, unlike bitcoin uses both Proof of Work (PoW) and Proof of Stake (PoS) mining algorithms. It uses PoW protocol to verify transactions, but a different algorithm “blake” to limit ASICs miners. ASICs miners defeat the essence of decentralization since they concentrate hashing power on a few individuals. Cryptocurrencies are not supposed to be controlled by a central power.

In this case, the hybrid system mitigates the limitations presented by either protocol. For a block to have authenticity, it must be mined by the correct nonce and confirmed or verified by not less than three participants in the community. The block reward at the moment is 1.374 DCR, and each block can only have 20 tickets.

PoS in this case requires that participants stake a given amount of coins to can act as verifying nodes for the consensus algorithm. No calculations are required to confirm transactions in this model of mining. Users can also lock or stake their coins for specified periods in which they receive block regards as interest.

Stakeholders who lock a part of their coins in the DCR blockchain receive tickets. Every ticket represents a single vote in this system. Once a participant uses their ticket, it returns with a small reward and the original ticket price. Each ticket is selected at random to vote, preventing the possibility of a participant who has a lot of tickets taking advantage over those with a few tickets.

Each ticket is limited to 28 days to vote and up to 142 days in which it can get selected. There is a 5% chance that a ticket can expire before it’s chosen to vote. In such a situation, the ticket is returned without a reward. Every block mined must have a minimum of 5 votes. If miners verify a block with less than 5 votes, they are penalized by a reward deduction.

Another feature with this coin is the ability to have transactions expire after a given period of time passes. The participants set the expiration time before signing a transaction. Once this time expires, the transaction is cancelled if it has not met specific set conditions.

DCR distribution of newly mined coins is a bit different from bitcoin in which all the coins go to the miner. With DCR, the PoW miner takes 60% of the new coins, PoS miners take 30% and the remaining 10% goes to the system’s development program. 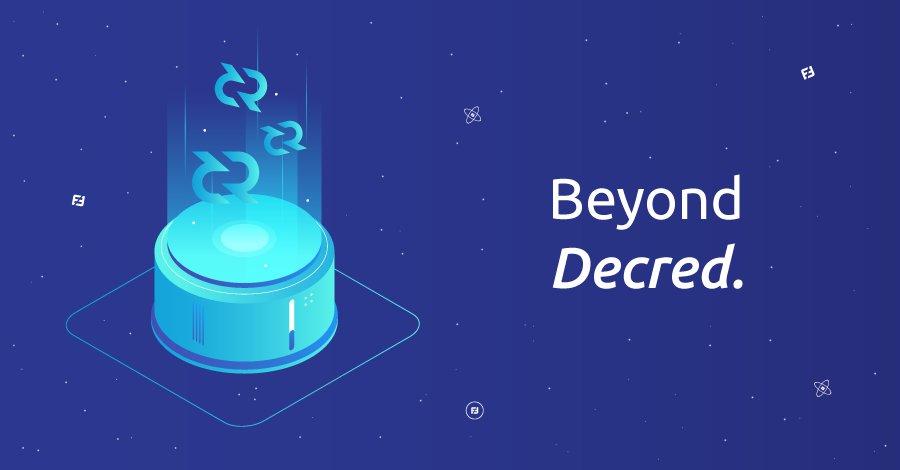 Decred aims to reduce bitcoin’s hard forks and avoid dividing the community. As a digital currency, bitcoin has been marred with a lot of challenges that are reducing its effectiveness. Bitcoin is in addition to not being scalable, has high transaction costs and slow transaction speeds. Bitcoin community is also contained in such a way that other lack any opportunity of developing it further and solve the existing challenges. The only way out with bitcoin is having a hard fork which eventually leads to the creation of new coins instead of improving on the existing currency.

Decred on the other hand is a democratic network focused on maintaining decentralization and low transaction costs. Using PoS as one of the mining protocols allows all participants to have an equal say when it comes to changes or improvements within the network.

While other networks with a voting system implement the proposed policies later on after completing the voting process, Decred network is designed in such a manner that the proposed changes or improvements are implemented automatically. These instant implementations prevent unscrupulous individuals or those with higher stakes from taking a central control of the network.

Many cryptocurrencies are grappling with the issue of slow transaction speed. Decred is a step ahead as it already included the Lightning Network that allows setting up of off-chain payment channels for users to transact fast and safely.

Another great feature within this network is the on-chain atomic swap. This is a special element that allows users to exchange different coins within the Decred network avoiding the usually long and expensive process of going through exchanges. The first successful swap that involved exchange of Decred and Litecoin happened in September, 2017.

Unlike with bitcoin where the miners get the entire block rewards, Decred has a unique distribution system that leaves some coins for the sole purpose of improving its network. This is particularly important since consistent improvement is need as challenges arise and it is easier to prevent any serious damage due to consistent monitoring.

• Decred does not only empower its users, it also allows them to decide the future the coin will take. It gives freedom to the users.
• You do not need expensive mining machines to mine Decred. Decred is friendly to the environment since miners don’t have to consume a lot of energy like with bitcoin.
• The use of a hybrid system where miners still have to get validation from those staking the coins prevents the possibility of PoW miners taking undue control of the system
• Improves the use of smart contracts. They have initiated a system in which contracts terminate after a given time preventing smart contract dumpster fires.
• Have established off-chain scaling to deal with the scalability issue. There are also prospects of on-chain scaling which will require increasing the block size, but the community is yet to decide on this.
• Its community of users is comprised of people from diverse backgrounds some of whom worked in bitcoin development hence experience and knowledge.
• The 10% of mined coins that goes to development encourages initiatives to promote the system.
• Has the lightning network feature that enables microtransactions and smart contracts.

Decred, like most or all other cryptocurrencies, is very volatile. There have been rapid changes in the coin’s price shooting up and down with the crypto market forces from time to time. Like bitcoin, the maximum coins that can ever be in supply is 21 million. Currently, there is a total supply of 7,565,743 coins with a circulating supply of 7,145,743. One DCR is at the moment retailing at $91.73. This price gives this coin a market capitalization of $655,485,428.

As mentioned earlier in this article, Decred was launched on the 8th of February 2016. Since its launch, the coin has risen tremendously both in value and popularity in the last one year. In 2016, the Decred crypto was worth approximately $1.20 at its launch. Less than a year later, this coin is worth $90.42. This value represents a 7,435% change. Buying this coin at its launch would have been one of the best investment in 2016. If one invested $1000 then, their investment would have been $75,350 in 2018.

The coin is barely three years old and has already risen beyond expectations leaving other altcoins still crawling. On January 9, 2018, Decred hit an all-time high of $126.8. this change represented an increase of 10400%. If one had invested $1000 to get about 833 coins, they would have been $104,000 richer in less than a year.

The meteoric rise can be attributed to the freedom and democracy users associate this coin with. Users enjoy the autonomy of being able to propose ideas to promote and improve the network without being muscled by wealth investors. The other reason is the possibility of earning more coins through staking instead of the tedious mining process other coins like bitcoin go through.

Decred seems to have a promising future considering its growth since its launch date. The Decred community is focused more on developing the network instead of marketing which is good since they will eventually have a new perfect product.

It is not certain that this coin can surpass bitcoin in value, but it sure has clear advantages to rule out that possibility. Bitcoin developers are also currently working hard to improve off-chain scaling, a development that will see the bitcoin network lower its transaction fee and clear the transaction back log.

The use of a hybrid system to mine DCR is critical going forward. The system prevents a few individuals from controlling the network, enabling all participants to have a say. With the PoS, participants will not only contribute equally, but can also acquire more coins through staking.

The strength of this network lies in its community and governance. With the right governance, the network participants will contribute positively leading to its growth.

We hope you have learnt a thing or two concerning cryptocurrencies and Decred in particular. We will continue monitoring this industry to ensure that you always remain informed. Keep checking our site for more of these articles.