What is Dai? - A Brief Overview

The age of information has brought many new and exciting concepts and technologies into our lives, both good and bad. As technology rapidly expands, it has encompassed many areas of economics as well, especially with the introduction of cryptocurrencies. But one of the key problems of well-known coins like Bitcoin and Ethereum has always been their volatility. MakerDAO launched Dai to overcome that problem with a unique approach.

But before we dive into the details, we need a foundation on cryptocurrency and stablecoins. Let’s start with the basics of what stablecoins are and what Dai is.

Simply put, stable coins are a type of cryptocurrencies that try to remain around a specified value, with a minimal margin of variation, usually by assigning a reference value that tracks a real currency or asset, such as gold, dollars, or similar.

Unlike conventional cryptocurrencies, which are traded like commodities and subject to speculative trading that can radically alter their value, a stablecoin has a pre-defined value. It is less like a stock or commodity investment and more like a piece of currency, whose value remains largely the same over time (aside from factors like inflation).

Dai is one of these stablecoins. This means that the Dai price will always aim to be worth $1 USD, thus eliminating the volatility aspect and making itself ‘’stable’’, hence the name. Mainstream companies have tried using Bitcoin as one of their accepted currencies but were driven away by its lack of reliability.

Merchants generally don’t want to gamble the money they gain from their products, and consumers would naturally like their $100 to remain $100, with which they can purchase something that is worth $100, without having to worry about a sudden plummet overnight.

While the promise of stable coins may sound unattainable and farfetched to most, upon learning their benefits, it should be easier to see their importance in the marketplace. However, the Dai stablecoin is a cryptocurrency that, unlike most other stablecoins, does not exist outside of the blockchain and does not base its stability on any governmental legal system or third party.

Long-term betting and gambling, purchasing things with payments several days in advance (or delayed payments), or any type of monetary transaction online demands a low threshold of volatility to be truly viable. As such, they cannot be denominated in any currency that has value graphs fluctuating like a rollercoaster, as current popular cryptocurrencies do. Further, they need decentralization in order to reach their full potential, and not be bound by borders and differing regulations from country to country or even state to state.

Being decentralized, which means that Dai does not rely on putting its users’ trust in a middleman, allows users to maintain full governance over their funds at all times, and practically trade in USD (since 1 Dai = $1), except you can do so via online commerce rather than in real life, with physical dollars.

Dai crypto coins are created by Ether holders sending their Ether into a Collateralized Debt Position (abbreviated as CDP), which means that they lock their Ether currency into a CDP and receive Dai in exchange. If they would like their Ether back for any reason, they can return the borrowed Dai (with an accumulated fee), and that’s all there is to it.

The stability of Dai relies on the market, with incentives for borrowing and holding Dai being subject to modification in order to maintain the stability. In the case that Dai is below its target value of $1, the cost of borrowing rises. However, if Dai is worth more than $1 at any given moment, the opposite is true – Dai then becomes cheaper to create. Thus the total supply of Dai is increased or decreased in accordance with the target value of $1, driving it towards very low volatility.

Relying on ‘’smart contracts’’ like the above-mentioned CDP, Maker, the group behind Dai essentially relies on users giving it ETH in exchange for Dai, as explained. If the value of Ether goes beneath a specific limit in any given moment, you either have to pay back the smart contract (much as you would by taking out a loan from a bank) or your ETH will be liquefied (meaning that it will be auctioned off to the highest bidder in order to minimize potential losses). Essentially, CDPs serve the function of a ‘’holding system’’ for the collateral, which in this case is ETH, to be held in the Maker system. Therefore, to sum it up, the entire purpose of these CDPs is to provide leverage, or collateralized loans, via decentralized methods. 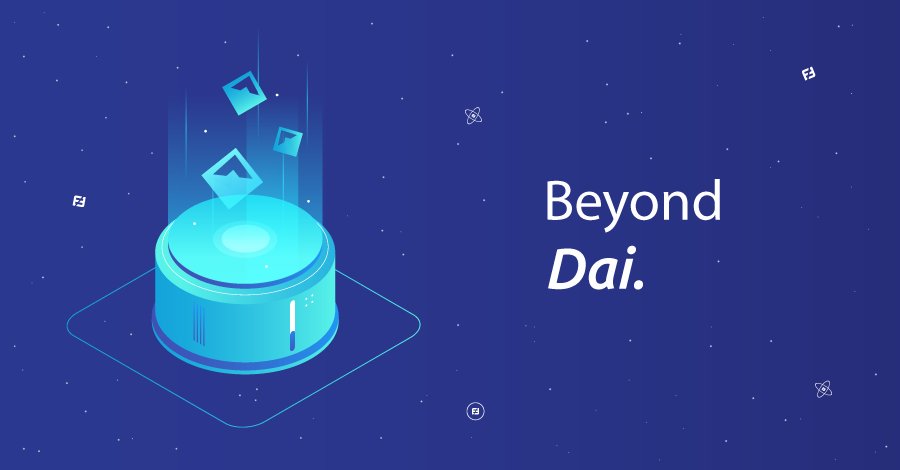 ETH Instability Not an Impediment to Dai

Considering that the price of ETH varies, MakerDAO has come up with a solution in the form of MKR tokens. Being a utility token, MKR is needed for paying the fees accumulated on CDPs as a result of generating Dai inside the Maker system. The MKR pays those charges and is ‘’burned’’ in the process, meaning that afterwards it no longer exists in the supply. All of this allows the system to function seamlessly.

Furthermore, MKR holders can vote for important decisions regarding the Maker system. Risk management is executed via holders voting on specific parameters for all CDP types and future collateral assets (Ether is the only one currently available, but more are planned). This is similar to shareholders of a company having a vote in corporate board appointments and major corporate actions.

The value of all MKR tokens will become diluted as a result of bad governance. If MKR holders make sound decisions (as they should), CDPs are guaranteed to remain over-collateralized. However, mistakes in the holder’s reasoning can happen, as a democratic system can never be guaranteed to be perfect. Consequentially, there exists a real possibility that some parts of the total portfolio become under-collateralized, as a result of bad decisions made by holders.

In case that this happens, the MKR token will serve its backup function. MKR tokens will be forcibly diluted in the automatic recapitalization process. If everything goes south, the Maker system will automatically generate new MKR tokens and instantly sell them on the market to the highest bidder, raising money to recapitalize for the downfall of value in the system, thus bringing it back from insolvency. This creates a penalty system, aligning the interests of MKR holder voters with the interests of the entire Maker system, doing away with the potential for exploitation.

How Dai is Different

Dai holds all the benefits of blockchain technology embedded into itself, being a real cryptocurrency, yet at the same time lacks any of the drawbacks of a cryptocurrency, not being exposed to volatility. Through the aforementioned governance and self-correcting mechanisms, Dai seeks to be a true currency, rather than a speculative commodity.

Dai, like many cryptocurrencies, can be very hard to understand for newcomers, due to its complexity, and this complexity has dissuaded many investors and companies from approaching the project, fearing losses due to lack of comprehension. However, understanding the intricacies of the concepts behind Dai is not a prerequisite for using the cryptocurrency – the Dai price is $1 and that’s all there is to it. You don’t need to fully understand how Dai works in order to use it, the same way you don’t need to know the mechanisms of a car inside and out in order to successfully drive.

And, unlike some other stablecoin currencies such as Tether, the MKR tokens, democratization, and self-correcting value mechanisms mean there is an added level of system stability and oversight coming from both the users and the system itself, reinforcing the stable value of the coin as enhancing its utility.

Creating Dai is pretty complex, as it first turns ETH into WETH (wrapped ETH) which is essentially an ERC20 wrapping around the ETH so that it can be used like any ERC20 token. After this, WETH becomes PETH (pooled ETH) and becomes part of the large pool of collateral ETH for all Dai. PETH can be locked up in a CDP in order to draw Dai in accordance with the PETH collateral.

At least, that’s the highly technical explanation. Too complex? No problem! There’s absolutely no need to understand all the technical details. Rather, in laymen’s terms:

• Anyone with an ETH wallet can own, send or receive Dai.
• It can be freely traded, exchanged without any middleman, and exists without a person/company controlling the cryptocurrency or controlling the ability to shut it down.
• Essentially, the whole Dai project is meant to ensure that US Dollars can effectively be sent from anywhere, to anywhere, irrespective of borders and other constraints, and without any fees other than ETH gas fees.
• You don’t need to go through the hassle of creating Dai by locking ETH up in a CDP in order to use Dai. – In fact, most users will simply exchange their ETH, dollars, or any other accepted currency for Dai, and they can use it freely afterwards, provided they have a crypto wallet (which they should in the first place, considering they’re buying Dai). It’s that simple.

In conclusion, Dai is poised to be game-changing, owing to this boastful claim to the fact that it will truly provide people with the ability to transfer US dollars instantly, globally, in any amount and without risks. This could be the first step towards enabling commerce to live entirely on the blockchain, without the possibility of a shutdown and without the problems that non-blockchain finances and commerce bring. Hopefully, word will spread much more about both Maker and Dai, as this is only the beginning of something that can really shake things up and cleave a path for the realization of the full potential of blockchain technology.