What is Basic Attention Token?

Measuring user engagement and advertising efficiency in the digital landscape today is difficult. More than ever, there are a wealth of ad-block technologies, rampant fraud, and abuse, and most advertising reach being concentrated in the hands of a few big-named players like Google and Facebook. Advertisers and publishers alike are looking for a new solution.

At the same time, users are constantly inundated with more and more ads. It becomes white noise and leads them to employ ad-block technologies or ignore advertising completely in the majority of cases. Many ads they see are annoying, frustrating, fraudulent, full of malware, and similar. It’s a minefield with little usable penetration to the majority of users, such that even legitimate ads for desired products or services don’t make it through the noise and come to the user’s attention. This is a problem that needs a solution.

The Basic Attention Token (BAT) and the Brave browser are that solution. Brave is a new browser (developed by a co-founder of Mozilla Firefox) that protects data privacy. It is open-source, and critically captures and maintains a ledger of user attention. Basic Attention Token, or BAT, is an exchangeable token based on the Ethereum blockchain crypto technology that acts as a measure or unit of user attention. BAT is really not a currency, security, or commodity like other crypto products, but rather a means to exchange and measure user attention, targeted advertising, and advertising spending between users, publishers, and advertisers.

Crucially, everyone gains from this system. Scam, spam, and malware advertisements are reduced, and users get fewer but better-targeted ads. Publishers generate more ad revenue, both due to reduced fraud and cutting out middlemen and affiliates/agencies. And advertisers get better data and more efficient ad spending and targeting.

The Basic Attention Token is a crypto product, based on the Ethereum blockchain technology. Like other crypto products, transactions and accounting are all transparent, managed on the public ledger. Unlike cryptocurrencies, however, including Ethereum itself, BATs are not a currency, but rather a means to settle and manage accounts between publisher content, user attention, and advertising spend. It is therefore considered a utility token, or crypto utility token, rather than a cryptocurrency.

While some BAT trading and market listings are available, the group behind the token does not encourage or facilitate these transactions. Rather, the Basic Attention Token’s value is as a token of exchange in the advertising and services marketplace, the combination of the BAT platform and the Brave browser. Otherwise, it has all the benefits of the blockchain, Ethereum-based technology, including the ledger, limited resource pool, transparency, accountability, and more.

The Basic Attention Token was developed to measure and solve the problem of attention economics – that is, as a means to measure, reward, track, and sell user attention in the advertising and marketing space. The team behind the technology includes many well-respected titans of the tech field, including founders, co-founders, and creators of technologies like JavaScript, Mozilla, Firefox, and more. The majority of the top talent behind BAT share work history at major players in the tech, business, and advertising industries, including Mozilla, Khan Academy, Evernote, Kerf Software, EFI/Fiery, JD Power, Yahoo, Tor, and many others, as well as academia and non-profits like the Electronic Frontier Foundation.

Brave launched in January 2016, and BAT was announced a year later. In May 2017, the initial offering aimed at selling $36M worth of tokens, was a complete success, selling out in less than one minute. This pool includes 1B tokens sold to the public, as well as the created user growth pool (to reward early adopters and incentivize sign-ups to the platform) of 300M tokens, and a reserved portion of 200M tokens as a development team pool, for a total of 1.5B tokens outstanding. 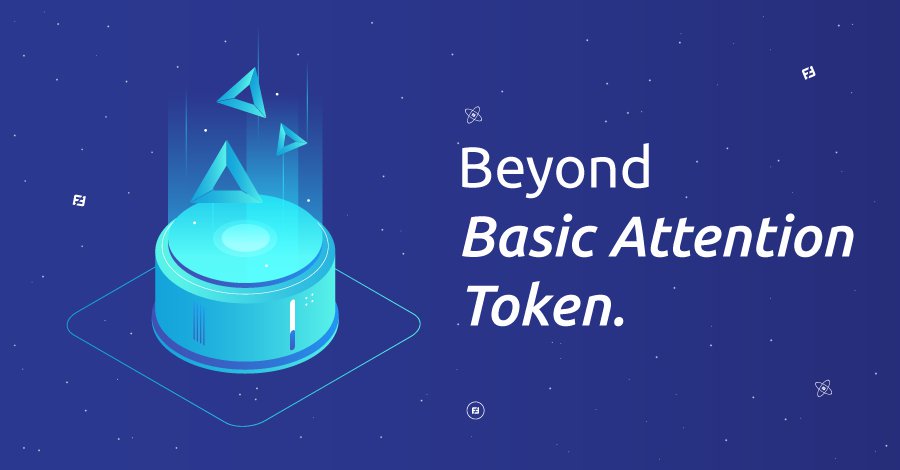 How the Basic Attention Token Works?

The overall Basic Attention Token value or meaning comes from how it interacts with the three core groups that make up the BAT ecosystem – users, publishers, and advertisers.

• The value flow of the BAT starts with advertisers, paying for advertisement slots with publishers, essentially purchasing the tokens and supplying the real-world dollar value.  This gives them better targeting potential, greater relevant viewership, and ensures user attention to the advertisement, as well as providing a host of metrics.
• These enter the publisher’s hands by way of slotting on their sites within the platform and are viewed by users.
• Users are rewarded for their attention on ads with a share of tokens, in addition to seeing fewer, but more relevant and well-targeted, ads. They can use these tokens within the BAT marketplace to purchase value-added services or content.
• An additional small portion of the token flow goes to Brave.
• The majority of the balance flows back to the publisher.
• User shares migrate to the publisher when redeemed for value-added services or content.

The actual transactions that occur in this process take place behind-the-scenes, utilizing the secure Ethereum blockchain technology. Ethereum is one of the pre-eminent crypto technologies today and has been invested in by a number of major banks and finance companies for its potential in a number of different areas, including smart contracts, which underpin the BAT system. It is a distributed, agnostic virtual machine, in essence, that stores and manages transactions and balances in a secure manner. Funding was achieved via the purchase of BAT coins with Ethereum currency.

The smart contracts for BAT are stored on the Ethereum blockchain, and use the ERC20 token standard common to Ethereum technology. They can be managed and stored in user’s accounts via a number of popular digital wallet programs and services. The centralized ledger system records and manages transactions like with any blockchain technology. And the Brave browser provides the “front-end” experience of delivering the ads to users and initiating the transactions to the ledger to reward users and publishers for the served and viewed, and send the metrics back to the advertiser. Advertisers then buy additional tokens from publishers to place more ads, and the cycle continues.

As previously mentioned Basic Attention Tokens do not, in and of themselves, serve to hold or convey monetary value. They are, rather, a utility token used to account for the value of user attention. This is in contrast to many other cryptocurrencies that can have many other functions. The most common cryptocurrencies on the market today, Ethereum and Bitcoin, both serve as currencies, as their name implies, meaning they have fluctuating prices that are linked to real-world values, allowing the exchange of real-world money into Ethereum or Bitcoin, respectively. While the ICO for BAT allowed for the purchase of tokens with Ethereum, the primary use of the tokens in circulation will be within the BAT advertising and services platform, integrated with the Brave browser.

Various products and services will be available through Brave and the BAT platform. Users will have a secure browser that suppresses ads by design, greatly speeding up browsing times, and rewarding them for their attention with the tokens. Publishers will be able to effectively manage their ad deployments with their content, and provide premium value-added services for users to redeem their tokens. And advertisers will be able to have their ads accurately targeted to users based on preferences and opt-in by users and ensure they get the user’s attention. All of this is accomplished while protecting everyone’s privacy in the system.

A large number of well-known content publishers have already joined the BAT platform, and more continue to join as the marketplace grows. The uses are numerous and varied, and since it is an open-source technology, new and novel uses will likely develop over time, all based around rewarding users for their attention to ads, publishers monetizing their content via ads, and advertisers getting targeted ads in front of the relevant viewers.

BAT is quite ambitious, though a great deal has already been accomplished. Over 16,000 publishers have signed up as of May 2018, the ICO has taken place with the tokens being fully funded, and there are currently around 400,000 BAT wallets, with 2.4M active Brave users per month.

Most of the milestones on their roadmap have been achieved, and the current focus is on increasing the user base and publisher base while adding additional metrics and data into the system. They are also working towards integration with other apps and platforms, as the open-source nature of the system allows for virtually unlimited applications of the technology, and these efforts are ongoing.

As with many crypto coins, Basic Attention Tokens form a fixed pool, with no future coin offerings planned according to the company. This thus makes them a limited resource. As the popularity of the BAT marketplace, the number of users, the number of publishers, number of advertisers, and various uses for the technology grow, the value of the tokens will grow correspondingly. While there is no intrinsic Basic Attention Token value, the inferred value of the tokens, and what advertisers will pay for them, will only increase over time, along with the market capitalization (or overall implied value) of the BAT platform ecosystem and coins in circulation.
Based on the ICO price, 1 BAT had an initial value of $0.036 undiluted. While the company does not directly facilitate trading or purchasing of tokens on open markets, they are transferable and as such trade is possible beyond simply advertisers using the money to purchase tokens within the BAT system. Therefore, the “real world” inferred value of a BAT as of May 2018, 1 year after ICO, was around $0.24 undiluted, or around a 567% increase in value.

In conclusion, Basic Attention Tokens are a new and intriguing utility token based on the Ethereum blockchain technology. Combined with the overall BAT platform and the Brave browser, this system allows advertisers, publishers, and users to benefit from less frequent but better, more-targeted advertising and user attention experiences. While the tokens themselves have no inherent monetary value and are not a currency, they are used to settle accounts and exchange services within the BAT platform. They are cryptographically secure in the Ethereum blockchain, and fully transparent and distributed like other crypto products. Their potential uses are unlimited, as the technology is open-source and can be deployed in a number of new and unique ways.
The BAT platform has seen steady growth in publisher count (150 to 16,000 in a year), user count (500,000 to 2.4M in a year), and advertiser count (undisclosed but inferred to be increasing as token value rises). The corresponding token value and the market capitalization of the tokens in circulation have increased over 5-fold from launch, valuing the BAT economy at over $240M USD in 2018, an impressive value considering the ICO of a year ago was only $36M. The growth is poised to continue, as advertisers, publishers, and services available continue to increase.