The rapid growth of blockchain and cryptocurrency technology continues to spur innovation and migration of the overall economy from traditional models to a more decentralized system. In order for that to happen, quality protocols need to be developed to allow users to exchange goods and services via blockchain network smart contracts, in an easy-to-use, low cost, multifunction way. 0x seeks to be that protocol.

The founders of 0x believe that the economy will continue to move in a direction where assets of all types will be traded via smart contract on blockchain technology. This may include currencies or commodities, much like the stock markets that exist today. But this can be expensive for users given the nature of how blockchain exchanges work and take fees at multiple steps in the process of executing sales and trades.

0x takes much of the “heavy lifting” of the process off the blockchain, and acts as a relay service marketplace, only interacting with the blockchain itself for transfers of value, reducing fees for users and enabling near-limitless possibilities for sale, purchase, and exchange of goods and services.

In simple terms, 0x crypto technology is not a currency mechanism, but rather a combination of a token (symbol ZRX) and a blockchain marketplace protocol. The protocol is designed to provide a means for developers to create and implement exchange solutions using the off-chain model. Participants in a transaction (called Makers and Takers) can broadcast their intentions and transaction needs, negotiate, and take care of other related business in an off-chain yet reliable, decentralized, trustless manner via the 0x crypto protocol.

The protocol integrates back to the Ethereum blockchain for the transfer of value/settlement of the contracts, using the ERC20 standard. The actual settlement of a given smart contract happens on the blockchain, but everything else stays off of it, managed by Relayers (automated systems that anyone can develop or run, essentially distributed computing and related functions).

The 0x coin, ZRX, is a token used by Makers and Takers to pay a small fee to Relayers for the deals they facilitate. It also serves as a means of governance over the protocol, features, and updates to contracts and methods as the technology evolves. This still remains far less expensive than the multiple Ethereum blockchain interactions in traditional smart contract execution, in which every aspect of the transaction takes place on the blockchain, each with a fee, costing Buyers and Sellers a lot and adding to the bloat of the blockchain records. 0x solves this problem.

0x was founded in October 2016 by Amir Bandeali and Will Warren, with the simple goal of making it easier to use blockchains to allow for meaningful commerce to take place, with as much of that commerce being decentralized and off the blockchain as possible to reduce costs and avoid blockchain bloat from unnecessary records. They believed that the marketplace had become saturated with multiple smart contracts, all managed through their own decentralized applications (dApps), but all attempting to accomplish the same thing – enable the exchange and settlement of smart contracts on the blockchain. 0x protocol seeks to fix that by being a modular underpinning protocol standard upon which dApps can be built, reducing the variability, trust/security issues, and learning curve of the myriad of different potential contract methods and systems out there today. 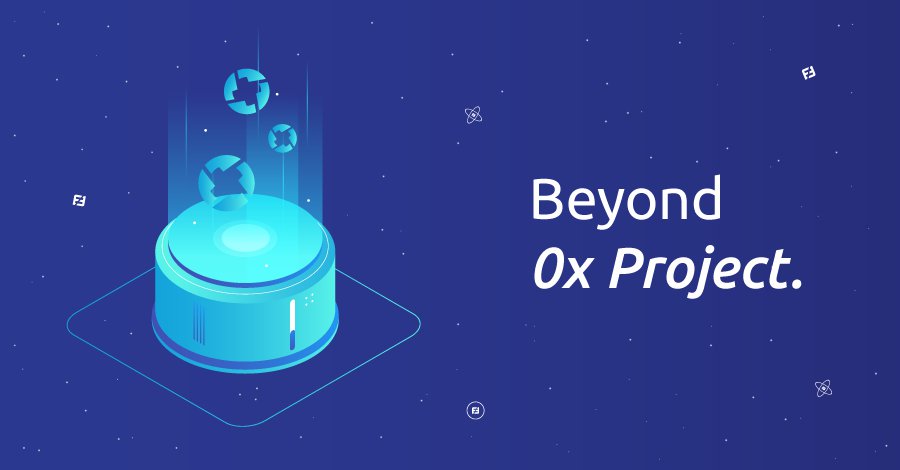 The 0x token and associated 0x protocol work in tandem to allow transactions and exchange of smart contracts, with all but the transfer of value taking place off the blockchain through Relayers. In technical terms, it can be thought of as a standardized method for engaging in direct commerce (i.e. peer-to-peer, point-to-point transactions) or market commerce (i.e. a seller broadcasting their desire to sell, or a buyer broadcasting their desire to buy). This all happens off the blockchain, via the Relayer network defined by the protocol. Then the actual transaction that transfers the value and ownership takes place on the blockchain. The 0x token is used for sellers (Makers) and buyers (Takers) to pay Relayers for their facilitation services and computing power.

Decentralized applications can be developed using this network protocol to provide different interfaces and features for users, so long as the underlying protocol standards are respected. This means that, regardless of different interfaces, market specialization, etc., the underlying processes of initiating a direct sale or purchase of goods via ERC20 smart contracts, or the broadcasting of the availability or intent to purchase goods via same, and the actual settling of that contract, becomes a standard, easy-to-understand process for users.

The order books, as it were, are maintained in the decentralized 0x network via the Relayer nodes, and interact with the Ethereum blockchain only to settle contracts, meaning the only consensus needed is for the transaction itself – a simple, basic function of any blockchain.

0x is different than the two other competing means of exchange for smart contracts currently available – centralized exchanges, and state channels. It is superior to these other methods in a number of ways.

Centralized exchanges are, first and foremost, centralized, whereas 0x is inherently decentralized, with no single point of attack or failure possible. This also gets to issues of control and regulation, with the 0x crypto protocol being governed by owners of the 0x coin – meaning Relayers, Makers, and Takers all have a say. 0x is also not an interface or application, but rather is the underlying protocol on which interfaces and applications can be built, modified, and combined, all run “behind the scenes” over the same network of Relayers and the same transactional processes for users. It is also free and open-source.

In comparison to state channels, 0x is superior as well. State channels essentially perform many of the same functions and are ideal for multiple off-chain transactions where a user then “cashes out” at the end of a period of time, and that final change of value transaction hits the blockchain. This is typical for things like online gambling. However, there are still several on-chain transactions involved, even if each and every interaction does not generate one, and there are other fees, including a deposit, and trust issues. Finally, state channels cannot directly interact with smart contracts, whereas 0x is fully integrated via the ERC20 standard.

All of these features, put together, give 0x meaning and value, providing the basic foundation for a streamlined experience of off-chain exchange with on-change transaction settlement, reducing fees for users while providing revenue for Relayers, and having a distributed exchange network that can’t be centrally hacked or brought down.

The 0x team have hit many of the major milestones on their original roadmap for the 0x token and protocol. Governance information has begun to become available, and the launch of the version 2 of the protocol itself is expected sometime this summer or fall. It will incorporate a number of additional ERC token standards to make the protocol even more usable and dynamic to today’s tokenized marketplace. Long-term, the intent is to continue to develop and add features as the blockchain, and token-based economies evolve and bring in new partners, dApps makers, and Relayers into the system.

The 0x token had an initial coin offering, or ICO, on August 15, 2017, with symbol ZRX. At launch, the value of the token/coin was $0.048, meaning the ICO sought to raise $24M for the 500,000,000 circulating coins (the other 500,000,000 are divided up in several ways but not generally circulating at launch).  All tokens sold out during the ICO. Since then the value has increased significantly, and despite following the overall highs and lows of the cryptocurrency market, 0x price and 0x value have remained high compared to the ICO, with returns of close to 20x the initial price.

This is due, in large part, to the utility of the 0x token and protocol. More and more dApp developers have been implementing the protocol, and as it becomes more ubiquitous, the 0x tokens naturally grow in value. Put another way, if someone had invested only $100 at the ICO, their token investment would be worth $1,827 in 2018, less than a year later.

In summary, 0x crypto technology is really a combination of a protocol and the 0x token. It seeks to become the foundational protocol for off-chain exchange transactions with an on-chain settlement for smart contracts. This reduces the fees that users have to pay for chain transactions, standardizes the user experience for buying or selling (regardless of chosen interface dApp), allows for secure, trustless, decentralized network processing of contracts, and avoids adding to the blockchain bloat by managing the order books through its own network protocol, via Relayer nodes. The 0x token is a means of payment for Relayers, extracting small fees from the Makers and Takers in the market, as well as a means of governance for the underlying 0x protocol, changes, and updates.

0x has demonstrated significant value growth since ICO and continues to add dApp developers and participating cryptocurrencies to the list of adopters of its protocol. It works better than state channels or centralized exchanges for most smart contract-type exchanges and seeks to be the premiere protocol for blockchain transactions in the tokenized economy.