The recent growth of cryptocurrencies and related crypto projects has seen a number of new coins, company names, and technologies enter the marketplace. These can be hard to understand and differentiate, leaving investors confused as to which currency to invest it, and users confused as to what coin or currency is best suited for their needs.

For gamers, one of the most exciting crypto projects is GameCredits, which seeks to become the de facto standard cryptocurrency for the gaming industry. This will enable the purchase of games and games content, such as DLC, and facilitate both macro and microtransactions within games or game management systems, globally, with the same currency, built on the principles of blockchain, decentralization, and a user-first, democratic mentality. GameCredits seek to leverage the security, speed, and convenience of blockchain technology and cryptocurrencies to revolutionize the game and in-game payment and transaction market.

GameCredits are comparable to many other cryptocurrencies on the marketplace, though differs in the details and the intent. As mentioned above, they are specifically geared towards gamers, games, and the video games industry. The stated goal of the company is to make GameCredits into the foundational, single currency solution for buying games and in-game transactions around the world, regardless of gaming platform or service. But otherwise, it represents a blockchain-based currency and platform with various features and services, along with a related token for eSports (more on that later).

Essentially, GameCredits are the currency, and integrate with a game or app store, called G-Play, where developers can sell their games. This benefits developers as the store only charge a 10% fee, as opposed to leaders like Apple and Google Play that charge 30%. Security and anti-fraud measures are high given the transparent nature of the blockchain, and developers can get paid quickly – a matter of hours or days vs. the two-month cycle typical for accounts receivable in traditional credit card models. For gamers, this can also translate into lower costs for games and allows for payment with GameCredits coins and other cryptocurrencies. It also offers a seamless, single currency for in-game payments, and means that credit generated from one game or system can be used in others as well, a very different and much-desired change than how the market generally works today.

The GameCredits coins are stored in a digital wallet, called the G Wallet. There is also an exchange, G Exchange, planned, to allow for multiple currencies – crypto and fiat – to be exchanged easily within the system. G Share is also in development (currently in Beta), which is a charitable platform to convert game credits into real-world impacts. They also offer a related program called MobileGo, which is a tokenized solution to mobile gaming and eSports competition, in the way that GameCredits are to the overall gaming community.

GameCredits were developed starting in 2014, relatively recently, and the team of gamers behind them has grown to over 100 people in 10 offices in 5 countries around the world, with continued expansion plans and ambitious features planned for the near future. 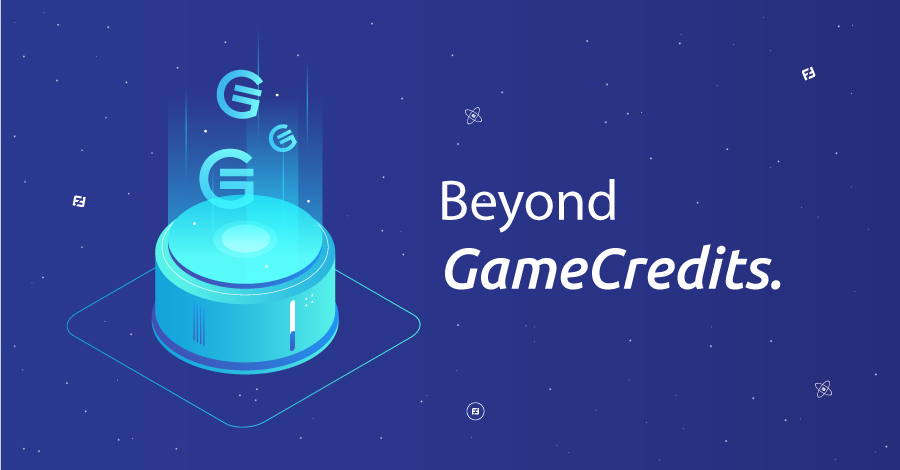 The actual GameCredits coins work much in the same way as other cryptocurrencies. They can be purchased on over a dozen different exchanges. There is no mining in this network, and it is based on the Ethereum blockchain and related protocols. That is how actual transactions are executed, utilizing the G Wallet from the company for storage. Distribution is based on purchases of the coins only, using either Bitcoin, USD, GBP, or EUR through the in-game wallet, or purchase on the third-party exchanges.

In practical terms, GameCredits can then be used to purchase games from GPlay or to make in-game purchases. Other planned features include eSports matchmaking and fast payouts using the MobileGo token, as well as transfers to other accounts like traditional cryptocurrencies.

For MobileGo, the technology used is a mix of Ethereum and Waves network protocols, designed to be compatible with either or both.

The real test is whether or not developers and game companies will adopt or allow adoption of this payment method, as there are several well-known, large players out there with their own, non-cryptocurrency environments already in existence. (EA’s Origin, Valve’s Steam, Blizzard’s Battle.net, Apple’s iTunes, Google’s Google Play, Sony’s PlayStation Network, Microsoft’s Windows and Xbox Marketplaces, etc.).

GameCredits is immediately unique because of the nature of what it seeks to solve – providing a coin designed for gamers, game developers, distributors, and the overall gaming category. It repeatedly highlights that one in three people on Earth are gamers, and the potential to revolutionize the industry with this technology is tantalizing.

As it stands now, the selection of games available in the G Play store is fairly limited, and the coin is not widely accepted by other third-party developers or markets. However, if they can overcome the adoption problem, the features and benefits include:

Most of the key milestones in the initial GameCredits roadmap have already been achieved, including the launch of the G Play store, G Wallet, payment processing, and related features. MobileGo has already launched and had a successful ICO. Upcoming plans include the development and implementation of other platform features, such as the G Exchange cryptocurrency exchange using GameCredits. GG service for eSports competition, and of course, increasing adoption and marketing, getting more publishers/developers to partner and come on board with the currency and project. No revised roadmap has been published at this time.

GameCredits (symbol GAME) did not have a traditional ICO but instead was a project funded by traditional financing means. Nevertheless, the ecosystem has only a fixed number of tokens, like many cryptocurrencies, which means that the value is likely to increase over time as adoption of the platform and currency grows.

Hopefully, this article has provided readers with a better understanding of what GameCredits are, what their unique features, benefits, and goals are, and given some insight into both the investment potential and practical potential for their use. With the solid backing of the blockchain, security and fraud are greatly reduced. With the convenience of an online wallet and game marketplace, allowing users to pay with other crypto and fiat currencies, the opportunities are nearly limitless.

GameCredits are still a relatively small player in the overall crypto world, the key question now is going to be whether or not GameCredits gain widespread adoption, as, if they do, they can truly revolutionize the way in which gamers pay for games and in-game purchases, as well as take money out of the hands of middlemen and back into the hands of the game developers themselves, encouraging more new and creative content for the future of gaming.